Marketing is a critical component to any company’s business plan. Without a marketing strategy, businesses will suffer in spreading word of their company and in acquiring new leads/customers cost effectively. Each client is different in terms of which marketing strategy is best for them depending on the client’s objectives, goals, and product. For some, Google Pay Per Click (PPC) advertising makes the most sense; for others, extensive search engine optimization; for others still, direct marketing; or, perhaps a combination of multiple strategies.

For one of Polar Design’s recent start-up clients, AnniesBid.com, an innovative marketing strategy was crucial to build enough buzz for the launch of the new online auction website that raises money for charity. But, which strategy would be the best fit? As a startup, the company faced significant budget limitations, but at the same time needed to maximize the results from that budget to ensure sufficient growth within the initial three months to achieve break-even.

After discussing AnniesBid.com’s objectives, two marketing strategies were deemed the best opportunities to help accomplish the main goals prior to website launch of building buzz for the new online entity and obtaining a substantial number of registered users in time for launch: Cause Marketing and Google Pay Per Click (PPC) advertising.

In Cause Marketing, a company connects with people’s emotions and shows them how a company’s values align with theirs in more ways than just a product by joining the company with a cause and non-profit organization. AnniesBid.com’s mission is to help raise money for charities through a fun and exciting online auction system, and what better way to help spread word than by a cause marketing strategy. 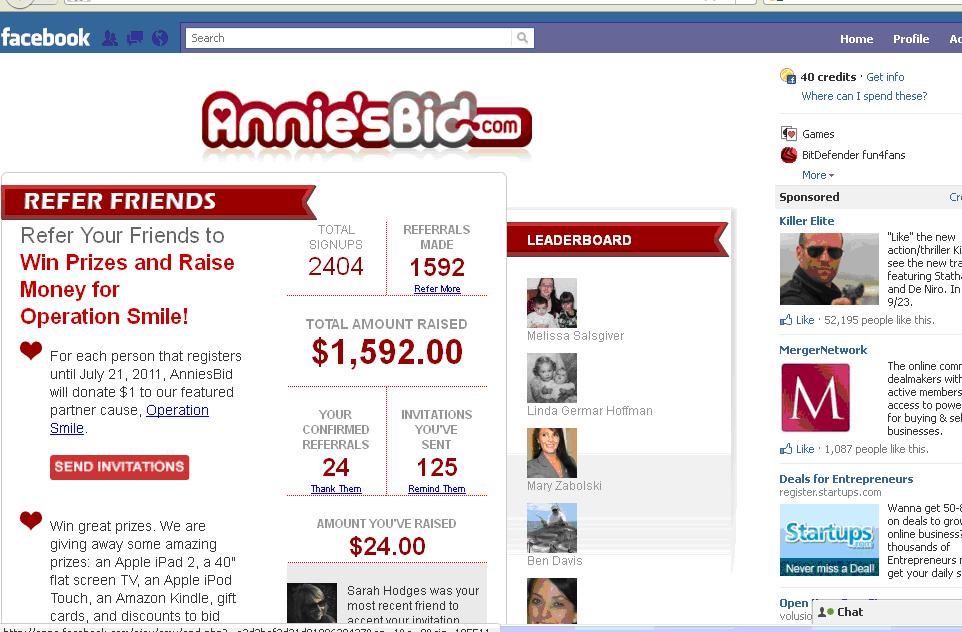 For the Cause Marketing strategy, Polar Design crafted a unique “Referral Contest” that provided participants the chance to win prizes for referring the most friends that signed up. Additionally, AnniesBid.com committed to donating $1.00 to its flagship cause, Operation Smile (www.operationsmile.org) for each contest sign-up. Contestants thus felt motivated by dual incentives: the chance to win prizes and the automatic “free” assistance they provided to Operation Smile simply by signing up and referring. 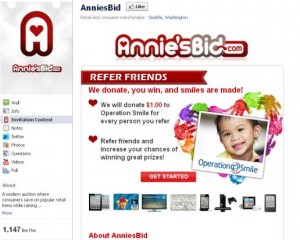 Polar Design designed and programmed a special Facebook application that allowed the company to capture e-mail addresses at contest sign-up and track referrals. As shown on the following base, unique design features such as a contest “dashboard” within the application motivated users by showing the number of people they had invited that signed up as well as their progress to winning prizes, all of which strengthened contestant’s desire to refer yet more people to the contest.

The application also sent a series of regular email reminders to participants – for example, when a contestant was passed in ranking by another, they would be notified of this to encourage them to refer more friends.

The contest attracted over 3,000 participants at a CPA (cost per acquisition of each participant) of approximately $6 per sign up (taking into account the total campaign cost including initial advertising to see the campaign, ongoing social media, the cost of prizes and donations). These participants converted to active auction participants at well over 10%, providing the company the much needed boost it required at launch.

In addition to the Cause Marketing strategy, Polar Design also advertised in Google for specific keywords in order to help spread word of the online launch. With Google Pay Per Click (PPC) advertising, companies choose keywords they would like their advertisements to show up for in search and they pay a fee each time a user clicks on the advertisement. Once they click the ad, users are then led to a landing page where the end goal is to capture user data by encouraging the user to register or sign up on the site through an online form. Conversion tracking is properly set up so as to analyze which keywords brought in the most traffic as well as which keywords converted at the best rate and at the lowest cost per acquisition. These numbers are important measures of which elements are performing well, which need further optimization, and which should be scrapped all together.

In AnniesBid.com’s case, Polar Design created multiple ad groups in the campaign covering a multitude of keywords. These included groups with keywords strictly related to the company, such as penny auction websites, online auction websites, and charity auction websites. Additional ad groups were created more specifically for the products which would be auctioned on the website, such as gift cards, Apple iPads, Apple iPods, Amazon Kindles, and more. The creation of specific ad groups with specific ads benefits the overall campaign in that it helps increase the quality scores of keywords, and as keywords have higher quality scores an advertiser will pay less per click.

After analyzing the Google PPC campaign results for AnniesBid.com, results showed that the campaign converted users at a rate of $20 CPA, meaning for every user that signed up on the site, AnniesBid.com spent $20 in Google. A CPA of $20 for a B2C web site is still a great mark, one any company should be pleased with given their margins. However, when compared with AnniesBid.com’s Cause Marketing efforts, Google’s PPC efforts resulted in a CPA nearly 4 times as high.

But, why the difference?

While Google PPC advertising is a great way to not only show up in search results immediately and therefore increase traffic and brand awareness, a strong Cause Marketing strategy within Facebook uses the strength of social connections and social awareness to build its brand, develop a contact list, and, in the end, it is a way of doing good within the community as well. With AnniesBid.com’s Facebook application, they achieved their goal and excellent CPA because of four main reasons:

The last point is very important to the Cause Marketing platform in that the Facebook application, AnniesBid.com brand, and charity donations were all spread across the largest social networking website practically for free. By utilizing the power of social media with emotional connections in causes and incentives in prizes, a Cause Marketing strategy not only helped build buzz about AnniesBid.com and its cause, but it also showed users how a company’s values align with theirs in more ways than just a product.

Through the power and emotional connect of Cause Marketing, AnniesBid.com’s website launched with over 3,000 registrants at a rate of $6 CPA. Because the campaign emotionally connected with the participants, the brand then felt more alive and relevant in the user’s eyes. And, as a result, a positive impact resulted not only for the AnniesBid.com brand in its online launch but a positive impact also resulted in the lives that benefited from the large donation AnniesBid.com was able to give to Operation Smile.

As one introduces a new online entity to the world or as one unveils new branding from a redesign of one’s company, one needs to think about how Cause Marketing through social media or other means may benefit not only the company and brand but also a non-profit organization and cause that both you and your users care deeply about.